During read out of the SweepEditor each row is analyzed one after another and the values created by each row are appened to each other. At the end, the SweepEditor returns a single sequence of Sweep values and the rows have no additional meaning regarding a variation inside the Sequencer.

Rows can be moved by drag & drop of the asterisk at the beginning of each row. 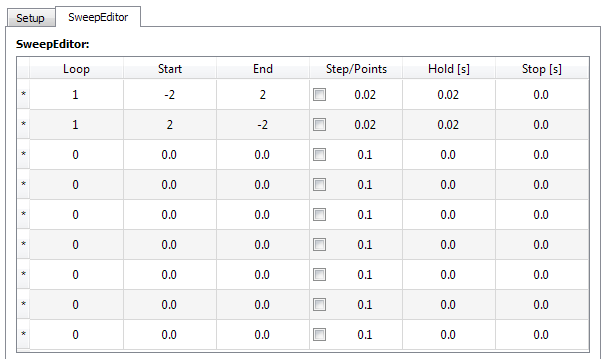 The SweepEditor as used in the exemplary setting "example_SMU.set". First, a linear sweep from -2 to to 2 with a step width of 0.02 will be performed. Each value is hold for 0.02 s after applying before the measurement continues. After the first row is finished, the second row will lead to a backsweep from 2 to -2 with the same step width and hold times. Thus, this SweepEditor example demonstrates how to perform a DualSweep measurment with a forward and backward sweep as used to characterize hysteresis.

First the Loop value decide how often the values of the row are created. Loop = 0 means "don't use the row" whereas Loop = 1 means "use the row one time". Thus, you can use the Loop to switch on and off a certain row. There is no need that used rows are at the top. These rows can also be at the bottom with some rows in the middle of the SweepEditor which are not used at all. Loop values larger than 1 are also possible and allow for interesting repetitions.

Start and End value determine the start and the end of a list of values. If they are equal, a single Sweep value is generated. In case of a logarithmic sweep, start and end value must be both non-zero and must have the same sign.

Each value of the be hold for the given time after it was applied to a device. After that hold time, the procedure goes ahead with the measurement. A hold time is beneficial to reach a steady state after applying e.g. a voltage before a current is finally read out. All items of a branch of the sequencer will be affected and have to wait this hold time as well.

A stop time can be used to switch all device of a branch of the sequencer to their stop values if defined after taking a measurement point is finished. Thus, a device can be stressed or relaxed for the given stop time before the next measurement point is performed. For example, the SMU module allows you to define a stop value which is by default 0.

In order to measure at a certain value multiple times, just set Loop of the row to a very high value and choose Start equal to End.

There are several memory test which can easily created using the SweepEditor. For example, Read-Write-Read-Erase tests can be designed by using four rows which have only one value each. The entire repetition of this "IV curve" can then be done within the sequencer using a Loop module where the number of repetitions can be entered.

Forward and backward sweeps as needed for a hysteresis test can be created by using two rows. Another possibility would be to use three rows of the SweepEditor. Thus, the Sweep could start and end at 0. This is especially helpful if starting from a higher positive or negative value could already destroy the device.