The sequencer is the heart of SweepMe!. Use it to create tree-like measurement sequences. Items can be placed by drag&drop from a list of all available Modules. There exists basic examples (Settings -> Load Example) that demonstrate the creation of measurement procedures.

The sequencer presents a measurement in a tree-like hierarchy of modules. Each module can be understood as a for-loop over its sweep values. These sweep values can be seen as set values that have to be applied and reached to perform a measurement point. Whenever modules are nested into each other, it automatically means that nested for-loops are created. As for any tree, there exist branches. If you have a single branch, all items are nested into each other. This is the most simple and basic configuration you can realize. In this case, SweepMe! will perform variation across all combinations of set values of each module in the branch. Each combination can be seen as a measurement point for which all modules of the sequencer are asked for their measurment values. These measurement values are typically different from the set values. For example, a source measuring unit could have a set value of 5 Volt but the meausurement value might be 4.99 Volt.

If you put items on the same level of hierarchy (siblings), you will automatically create a second branch of the tree. Now, SweepMe! will run through the first branch, followed by the second branch. Only the modules of the current branch are used to apply the sweep values and readout the measurement values. Of course, these two branches might have some modules in common and these modules will take part at the measurement of both branches. Please see the example below:

Visualization of the traversing of the sequencer which has a device with two consecutive children.

Let's consider a sequencer arrangement with three SMUs where SMU 1 has two direct subelements, SMU 2 and SMU 3. SMU 2 and SMU 3 shall be at the same hierachy of the sequencer tree, i.e. they will be swept consecutively.

The measurement will then have the following sequence:

This measurement process is shown schematically in the animation on the right.

The sequencer has an invisible root item called 'Time' being part of any procedure. It measures the elapsed time and generates a time stamp. You will find it for example in your saved data as well as if you configure a widget such as Plot.

There are basic modules that are used in almost any type of measurement, e.g. Loop, Hold, or MakeFile. Have a look at the examples to understand their meaning. We also recommend to play around with these modules to understand how they work and interact. For example, try to combine multiple Loop or MakeFile to see the sequence of the measurement and the generated data files.

Some modules can be used to implement measurement equipment via a Device Class. These modules have a user interface field 'Device' that allows to select the Device Class.

SweepMe! can be extended into any direction to implement individual setups, devices and tasks. Contact us to discuss your specific needs.

Modules are added by drag&drop from the right sided list of all available Modules. Some modules generate a new tab, other modules have a hidden dialog. In both cases, the module can be configured, by double-clicking on it.

Just drag&drop a module including all child items to a new position in the sequencer. If you like to insert the item between two other items at the same hierarchy, a thin black line must appear between the two items.

You can remove a module from the sequencer by selecting it and pressing 'Del(ete)'. An alternative would be to right-click on a module and click 'Delete selected item(s)'

The following figure highlights the branches of an example as needed to understand the operation of the sequencer. 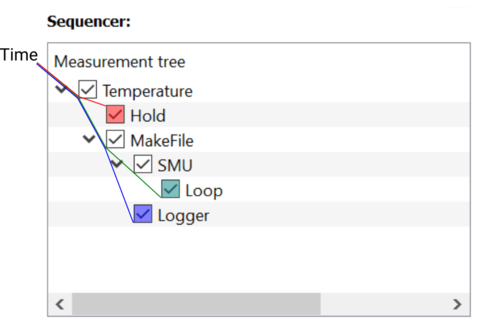 The measurement would basically perform a temperature variation. For each temperature, a Hold ensures to wait a certain time before taking the current-voltage characteristic by the SMU module. A module Loop is a child of SMU and thus repeats the measurement of each voltage as defined by the number of repetitions. In a last step a Logger module is used, e.g. to read out a temperature sensor to do a control measurement. Then, the procedure goes ahead with the next defined temperature. Files will be created for the second and third branch for which MakeFile is in. For each temperature a new file is created as the module Temperature is above MakeFile. Furthermore, the data of SMU and Logger will go into individual files as they are in different branches.

A child module is the module that is inserted into a certain module. For example, the module MakeFile is a child of the module Temperature in the example shown in the figure.

The parent module is the module into which a module is inserted in. For example, the module MakeFile is a parent of the module Logger in the example shown in the figure.

A leaf of the sequencer is always a module that has no child items, i.e. no module is inserted to it. The modules that are leaves have colored CheckBoxes in the figure.

Each module that is a leaf defines a new branch (see colored lines). A branch is therefore given by all modules that are between the invisible root module Time and the leaf module. Modules can be part of several branches simultaneously. In the example, the module Temperature is part of all three branches. Such Modules that are part in multiple branches perform the measurements that are defined in each branch. The number of leaf modules is always the number of branches.

There is a crucial difference between setting a sweep value (also called set value) and reading a measurement value:

Setting a sweep value: The sequence of modules has a crucial impact on the measurement procedure, i.e. in which order parameters are applied to your devices. This is due to the fact that each module presents a for-loop over its sweep values and strongly depends whether a module is above or below another module.

Procedures, as defined by modules in the sequencer, can be saved and restored via a setting.